The Atlas (now Denel) AH-2 Rooivalk (Red Kestrel) is in many ways a legacy of South Africa’s effort to develop an indigenous arms industry due to the international arms embargo that was in effect throughout the 1970s and 1980s. As a result, South Africa’s industry grew significantly and today the nation is a major player in arms production.

Development of the AH-2 Rooivalk began at Atlas as the first domestically produced attack helicopter in the early 1970s. The program initially involved the XH-1 Alpha and XTP-2 Beta, which served as system test-beds and concept-proving platforms. This led to the development of the Rooivalk prototype, originally designated the XH-2 (Experimental Helicopter 2), which made its maiden flight in 1990.

This was redesignated the CSH-2 (Combat Support Helicopter 2) before a second prototype, the Advanced Development Model (ADM), was produced and tested with new avionics and ωєαρσиs systems. By appearance this was a completely new platform, but it was in fact very much based on the South African Oryx utility helicopter—itself a reverse-engineered and upgraded version of the French Aerospatiale Puma.

The final result proved to be ideal for South Africa’s needs and was designated the AH-2 Roovialk. The South African Air Force (SAAF) ordered a dozen of the choppers and the first of those entered service in July 1999.

While South Africa only operates twelve AH-2s, including upgraded versions, the platform has proven to be reliable and well suited to the harsh African environment. A design feature of the Rooivalk is its ability to operate for prolonged periods without sophisticated support. Today, the helicopters form part of the No. 16 Squadron at Bloemspruit Air Force Base near Bloemfontein. 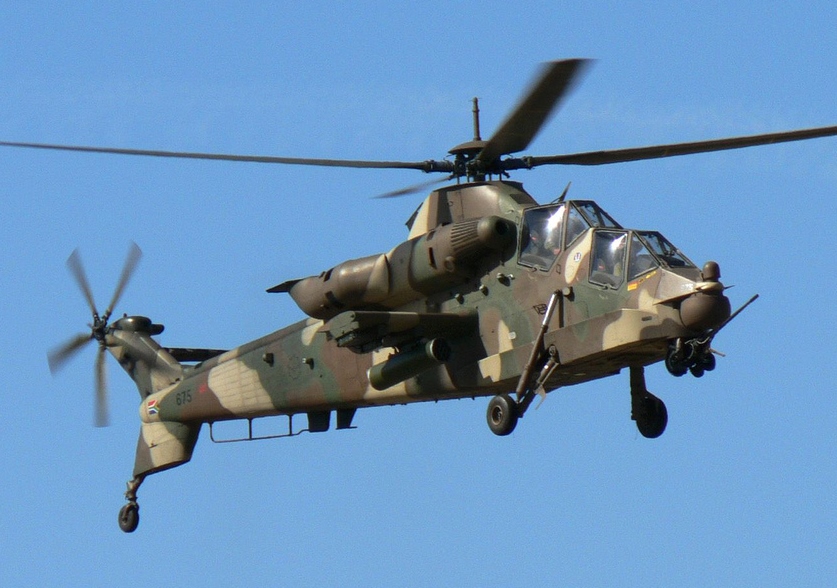 The helicopter features a tandem cockpit layout, starboard tail rotor with a port tailplane, a fixed wheeled undercarriage with wire cutters above and below the cockpit and on the undercarriage. According to Military-Today, it is powered by two Turbomeca Makila 1K2 turobshafts, which provide 2,301 horsepower. The cruise speed is 173 mph (278 km/h) and it has a maximum speed of 192 mph (209 km/h). The warbird’s range is 460 mile (740 kim) and a service ceiling of 20,000 feet (6,100 meeters) with a rate of crime of 2,620 ft/min. (13.3 m/s).

It also has a crash-resistant structure and is designed for stealth with low radar, visual, infrared and acoustic signatures.

While the South African manufacturers have offered the Rooivalk for sale—including to the United Kingdom and Brazil—it was without success. Despite the capabilities of the helicopter, including its ability to perform a loop and fly momentarily “upside down,” it is still operated solely by South Africa. It was deployed with the SAAF as part of the United Nations Force Intervention Brigade to support the UN’s Organization Stabilization Mission in the Democratic Republic of Congo in 2013, where two of the AH-2s took part in action near Chanzu, thus proving the combat capabilities of South Africa’s indigenous “Red Kestrel.”