Home » Germany Hoped the Krummlauf Would Change the Outcome of WWII

Germany Hoped the Krummlauf Would Change the Outcome of WWII

The curved bullet scene in Wanted (2008) wasn’t the first time the concept of having a bullet travel around corners was thought up. In fact, during World War II, the German Army invested quite a bit of time and resources into developing and issuing a gun attachment known as the Krummlauf for this exact purpose.

The German Army’s hopes for the Krummlauf

The Krummlauf was developed in 1943, after the German Army began researching an attachment that could change the course of bullets fired through the straight barrels of typical assault rifles and machine guns. They originally tried to attach a 20 mm curved barrel to an eight mm rifle, before landing on the final design.

The attachment would be equipped to the MP 44 (StG 44), to allow soldiers to shoot at targets without the risk of being hit by return fire. The plan was to provide each infantryman operating an MP 44 with a Krummlauf, with the ultimate aim being to swing the tide of the Second World War in Germany’s favor.

Use by German infantrymen

StG 44 fitted with a Krummlauf attachment

The infantry version of the Krummlauf, dubbed the “I” variant, was 14 inches long and featured a 30-degree bend to the barrel. Its configuration began with a four-inch straight barrel, followed by a five-and-a-half-inch curved section, and finished with another four-and-a-half-inch straight part. Along with being paired with the StG 44, it could also be attached to the MG 42.

The variant used by infantrymen included a mirror that allowed the operator to see exactly where and what they were aiming at, without compromising their position. As stated by The Armory Life, “Using the curved barrel, a German gunner would be at least 20 cm below the edge of his foxhole or whatever cover he was using.” 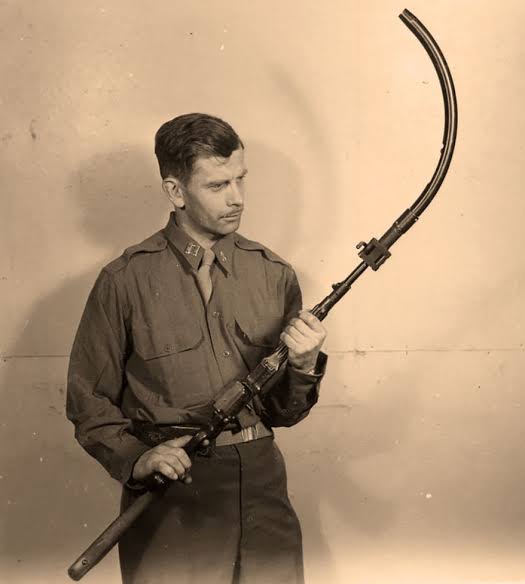 They could also maintain a cheek weld stance with the use of a front sight mounted on the end of the Krummlauf. A rear sight was also attached behind the mirror.

Equipped by the Elefant tank destroyer

StG 44 fitted with a Krummlauf attachment

The tank variant of the Krummlauf had four different versions: a 30, 45 and 60-degree barrel, as well as one coming in at a more severe 90-degree angle, dubbed the “Versatz P.” This model was designed to allow the rifle to be positioned vertically, to reduce the amount of space it took up. The intent was to mount it on a hemispherical steel ball with a cup joint, with the ability to tuck the curved barrel into a port in the vehicle’s armor.

This version of the Krummlauf was initially intended to be equipped by the Elefant tank destroyer. Approximately 500 were produced and delivered, along with 1,500 specially-designed sights.

When the US military got ahold of the Krummlauf following World War II, officials tested at the Aberdeen Proving Ground in Maryland. Those charged with conducting the tests quickly discovered the attachment was essentially a failure, as it had a very short lifespan. It was originally expected the Krummlauf would survive 6,000 rounds being fired. In reality, the 30-degree version managed a lifespan of just 300, while the 45-degree variant survived only 160.