The Ordnance ML 3-inch mortar was the United Kingdom’s standard mortar used by the British Army from the early 1930s to the late 1960s, superseding the Stokes mortar. Initially handicapped by its short range compared to similar Second World War mortars, improvements of the propellant charges enabled it to be used with great satisfaction by various armies of the British Empire and of the Commonwealth.

The ML 3-inch mortar is a conventional Stokes-type mortar that is muzzle-loaded and drop-fired. It also reuses many of the Brandt mortar features. 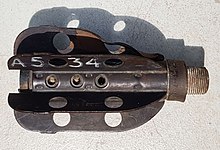 Based on their experience in the First World War, the British infantry sought some sort of artillery for close support. The initial plan was for special batteries of artillery, but the cost was prohibitive and the mortar was accepted instead.

The Mark II mortar (Mark I was the Stokes) was adopted by the British Army in the early 1930s; and this was the standard British mortar when the Second World War broke out in September 1939. Experience in the early part of the war showed that, although the Mark II was reliable and sturdy, it did not have sufficient range compared to the German 81 mm s.GW.34 mortar. A series of experiments and trials using new propellants improved the range from 1600 yards to 2800 yards by about 1942; and, by 1943, the barrel, baseplate and sights had also been improved. Although called the ‘3-inch mortar’ by the British Army, its calibre was actually 3.209 in (81.5 mm).

The ML 3-inch mortar was carried on three packs by infantry or on Universal Carriers.

The Mark II remained in service with the British Army until replaced by the L16 81mm mortar in 1965.

Canadian army modified some of its 3-inch mortars, lengthening them to increase their range. This modification was abandoned as it was considered too heavy.

The Australian army, for its part, shortened the barrel for use in jungle.