Home » What is the combat power of the Type 055 guided missile destroyer of the Chinese Navy?

What is the combat power of the Type 055 guided missile destroyer of the Chinese Navy?

The Lhasa, a Type 055 stealth-guided missile destroyer — the largest and most advanced warship in the People’s Liberation Army Navy (PLAN) — was seen leading three Type 056A corvettes in a three-day military exercise in the Yellow Sea.

In terms of power, Flight III Arleigh-Burke and Type 055 are comparable, but the Type 055 has more power

The Arleigh Burke class uses four LM2500 gas turbines to power the ship’s two drive shafts in accordance with two parallel connections. The gas turbine used in the 055 is the GT25000. The performance of the two is basically comparable but the chinese GT25000 is slightly more powerful, but it has not yet reached the level of distance from the LM2500 used by the Burke class. If the Flight III Arleigh-Burke is replaced with the latest improved model of the LM2500, the dynamic performance is estimated to be better than that of the 055. However, from the radar configuration of Burke 3 (Flight III), we can basically judge that its gas turbine is still the same as Burke 2A. The reason behind this is a change in the radar settings. The main radar used in the Type 055 is a dual-band dual-quadron phased array radar. The Burke 3 is said to be designed with a dual-band radar design of four-sided S-band radar and three-sided X-band radar, but during the specific construction, the X-band radar on the top of the Burke 3 mast changed from a three-sided array to a single-sided array. face rotation array. There is a huge problem here, and this problem is likely to be related to motivation. 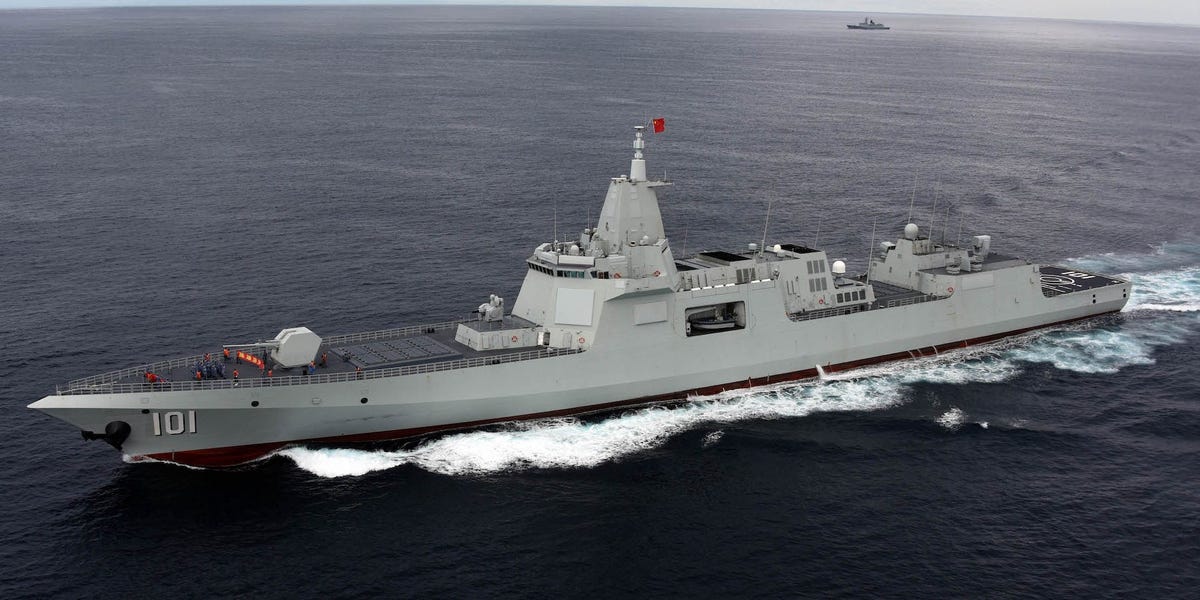 The power is not enough, the direct reason is that the power system uses the original LM2500, neither the LM2500+ nor the LM2500+G4, because the output power of the latter two is better than our GT25000, if the power of the Burke 3 is more powerful. A good gas turbine, there is no reason to change the X-band radar, which is not too expensive, from a three-sided array to a single-sided array.

At present, the maximum output power of china’s GT25000 has reached 33,000 horsepower after years of optimization. The power output of the Burke-class LM2500 is about 30,000 horsepower. The reason why more advanced gas turbine models are not used is estimated to be determined by the limitation of the Burke-class hull, right? After all, the more advanced models are larger in size. As the design of the Burke class is more than 25 years old, their potential has basically been exhausted. If the gas turbine is to be replaced, it is necessary to change the design of the turbine compartment. The changes to the chimney and air intake of the gas turbine will directly affect the entire hull of the warship. For the United States, it is equivalent to redesigning a new type of destroyer. The Burke 3 has little modification to the hull of the Burke 2A, which shows that the Burke 3 is unlikely to be adopted without more advanced gas turbine.

In terms of stealth ability, the Type 055 is ahead than Burke 3

China’s 055 adopts an integrated mast design, and all radars and other equipments on the mast are integrated into a comprehensive mast. At the same time, 055 also improved the chimney and air inlet design of 052D, which maximized the stealth effect of warships. We have not found the specific data of the radar reflection cross-sectional area of 055, but from the stealth design of DDG1000, which is only equivalent to the radar characteristics of a 300-ton boat, it can be seen that the radar characteristics of 055 are not too large. And the stealth design of Burke 3 is not good. This warship hull was designed as the first Aegis destroyer in the last century. After years of improvement, the stealth performance has not improved much. This may also be the reason for the exhaustion of the hull design margin. At this point of transition from capital ships to stealth warships, Burke 3 seems to be going back wards.

Everyone may criticize the stealth design of warships, because even fishing boats with hundreds of tons of radar characteristics can still be detected within hundreds of kilometers. It seems that there is no improvement in being discovered by the enemy. I think this question still needs to be looked at in two parts. The stealth capability of a piece of weapon and equipment cannot be designed to be completely stealthy overnight. When you were designing a stealth warship, you were still figuring out how to improve the superstructure of the warship to design a stealth warship, which is undoubtedly a step behind others. This is like the attempt of stealth fighters that started during the Cold War between the United States and the Soviet Union. The United States has been working very hard. Although it did not do well at the beginning, it continued to work hard and finally designed a stealth fighter with good performance. And because of insufficient accumulation in Russia, the stealth ability of its Su 57 is still not good. On the vertical missile launching cells, the Type 055 not only has a large number, but also has a large size and better performance, burke 3 is still behind in this field

The weapon and ship power system of the 055 is better as compared to other ships in the world. Although Burke 3 is a advanced ship but there is still a big gap if it is compared with the Type 055

Let’s first look at the weapons. Many people have discussed the advanced performance of the main gun of the 055. We won’t say much, just talk about why it is more advanced than the American Burke-class naval gun. The United States has basically stagnated in the design of naval guns, and is no longer designing more advanced chemically propelled artillery. The design of the American naval guns now centers on the revolutionary artillery of the railgun class.

From the point of view of the United States, when missiles have become mainstream weapons, the range of naval guns has no advantage, so the design of naval guns is not so focused. In this regard, China and Russia are now number one in the world, second is Europe, and third in the United States. The most typical example is that the U.S. naval guns no longer use water cooling.